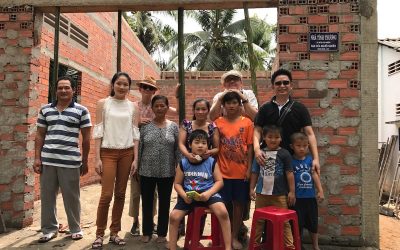 Ben Tre little houses Mekong Delta, South of Vietnam, 12 March 2017 On that Sunday we left with our dear […]

On that Sunday we left with our dear friend Hung Dinh and with Andrew Duong.

Andrew lives in Australia where he founded the Friends of the Poor organisation to encourage supporting the most disadvantaged in Vietnam.

Friends of the Poor is run by 7 permanent members and some 100 volunteers who travel all over the country, meeting the inhabitants and acting as intermediaries with local authorities.

They receive a great amount of donations, fully redistributed towards the construction of simple, sound and strong new homes.

Almost 30 have been built in one year.

We went to visit two of them, still under construction.

It takes a good 3 hours to drive from Ho Chi Minh City to the Ben Tre Province, also known as the ‘Coconut Province’. Indeed, before us a landscape full of coconut trees stretches as far as the eye can see. A mesh of irrigation canals lies below the palms. Here, everyone lives from the harvest, some people sell fruit, others woven leaves, some make wood, furniture, roofs. Here the land is flat, with trees as the sole horizon.

Life is harsh; Last year the China Sea bordering the province pushed its salted water too far back into the land. As a result, the crops were ruined and water no longer drinkable.

A few kilometres from our destination, Bac Lieù, we stopped on the roadside to meet a member of the local authorities and a young volunteer woman, we left them some milk cartons to distribute and we all left together.

We then reached the house of Mr. and Mrs. Tao.

Ms. Tao is disabled and only moves with a walker. She is quite small, thin and smiling. Her new red-brick house is almost finished. Toilets have just been added inside.

Indeed, the houses are primarily intended for families with a handicapped member. Often suffering from the effects of the “Agent Orange” dumped by the Americans on the Vietnamese countryside during the war.

Large fresh coconuts were presented for us on the table, a refreshment before we left.

We then sank deeper into the countryside.

The roads are so narrow that we could hardly imagine driving on them. Flowers had been planted on the sides of the road, the surroundings were clean, almost joyous; We nevertheless finished the journey, some of us by scooter, others by foot.

A small crowd was waiting for us. Women, children, some men who were not at work and members of the local authorities. In Vietnam, the authorities are in charge of counting the poor and the disabled.

This house was not so advanced. Fresh water is lacking to make the concrete. Donations will therefore be used to stock it up and restart the work.

It is meant for an energetic young woman and her disabled son, who can neither speak nor be schooled.

We distributed some food, the children played around a table filled with duck-based dishes: a steaming soup, boiled duck, rice and shrimps from the river.

It was very hot, the conversations merged, we did not quite understand but everything seems to be moving forward!

Before returning to Ho Chi Minh City, the authorities took us to the hut-house of a family whose case is under study. The father has a heart disease, he showed us his file, he hasn’t been able to work for two years; his 8-year-old daughter was born deaf and autistic. Only the mother can now provide for the family: she picks up palm leaves and makes bundles for sale.

A serious, studious discussion began so as to evaluate the possibilities of supporting them by constructing a new house and a well.

This small houses are paid for by donations and built by local workers under the supervision of the authorities.

We decided to give Andrew that amount.

There is also $500 left from our last year donation, which will contribute to the future works.

It is therefore with a happy heart and full mind that we went back the sounds of the city at nightfall.