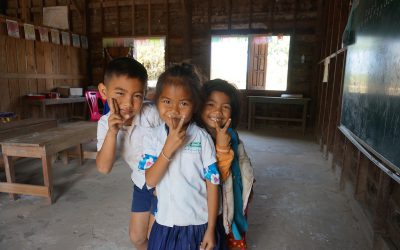 Contributing to extending and sanitizing a school in the village of Ban Pualao, on the Done Daeng Island

Report of our visit on Don Daeng island in February 2016

Don Daeng, “The Red Island”, where we are staying is located opposite Champasak which used to be the third kingdom of Laos, in the south of the country.

The island hosts eight small villages and can be crossed by foot, bicycle, on small motorbikes or on very strange tractors.

No cars and hardly any tourists, except those relaxing and making the most of this natural and quiet environment at La Folie Lodge.

La Folie Lodge was founded in 2009 by Antoine de Noailles and is now run by Axel Wolkenhauer. During the constructions of a set of very nice bungalows they decided to support the community of the island.

Especially by refurbishing or enlarging the small village schools and by conducting the renovation of the only clinic in the surroundings.

These grants are provided by the Folie Lodge, the partner-clients and patrons such as Paysages Humains.

Finally we visited the schools :

But the one in Simongkhoon, completed since 2012, looks brand new. Then the clinic, bright white and welcoming, with three small rooms, one for care and delivery, one for a chemist, and a resting room for children.

And above all, we get to know, with Axel, the new expansion project for the Ban Pualao school. With a detailed and clear quote in hand, provided by the village chief and subsequently translated, we evaluate the work to about $ 5,000.

The school welcomes 56 children and 3 teachers, but the two existing classes are not enough to accommodate all these people. So the works meant to begin in late March 2016 include: – the creation of an additional class by extending the building, a class of 6x4m separated from the others by a wooden partition – digging at the back (see photo) to lodge a future toilet – and finally the purchase and installation of a pump to provide children with clean water (water is 30m deep).

These works are to be completed by September 2016, after the long rainy season, for the next school year. The equipment, tables and chairs will be made by the village carpenter and walls and painting by members of the community (except the electrical works and installation of the pump that will require a professional intervention).

Riding our small motorbikes we return to the Lodge via the grand tour of the island, crossing villages stretched along the Mekong where buffaloes and fishermen are relaxing. The season is very dry, everything is yellow and burnt by the sun, yet the landscape and people smile at us …

The next day, finances in his pocket, Axel is delighted to announce that the works have started!

La Folie Lodge is a romantic hotel located on the Done Daeng island, on the banks of the Mekong river in southern Laos, facing the pre-Angkorian archaeological sites of Wat Phu.

Originally built by Antoine de Noailles, in the last few years, La Folie Lodge’s current director Axel Wolkenhauer has been developing community projects with the people of the island in order to improve their standard of living through employment and staff training on location as well as encouraging local culture and environmental preservation.

All those works were carried out by the villagers themselves on a voluntary basis (apart from the electrical works).

Today, La Folie Lodge’s new community project we would like to support is the expansion of the school and its equipment; i.e. creating a new classroom, building toilets and installing a water pump.
The estimated cost for these works is $5000
An initial fundraising enabled to collect $1000 and La Folie Lodge will give an extra $1100.

By going on location between in February 2016, we will estimate the (partial or full) remaining amount needed to start the works as soon as possible.