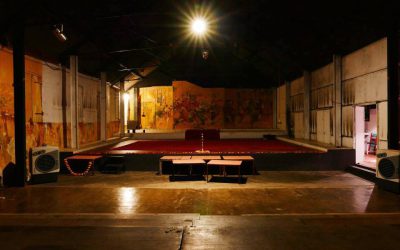 Supporting the renovation and running of a new theatre in Pondicherry, Tamil Nadu Province, India.

From January 2017 Indianostrum, the wonderful Pondicherry theatre troupe, created and run by Koumarane Valavane, that we discovered in January 2016 and decided to support, is working on a major project in France, at the Théâtre du Soleil.

In January 2016 Indianostrum hosted the first rehearsals of what would become Ariane Mnouchkine’s La Chambre en Inde (house in India) performed at the Théâtre du Soleil (at Vincennes’ Cartoucherie) from 10 April to 25 June 2017. It is now the Compagnie du Soleil’s turn to welcome them.

The small troupe from Pondicherry will perform:

Here are few words about the three shows, bringing together long-term work and the multiple talents of its Indian actors and dancers:

Inspired by the famous Mahabharata epic, this tragedy is based on texts by Rabindranath Tagore and Jean-Claude Carrière.

A show focused on abandonment, identity and martial arts, Kunti-Karna, unravels the thread of Kunti’s fate, a mother who gave up her illegitimate son, Karna. The son then became a great warrior and was eventually killed by his half-brother.

This moving project was born in 2009, inspired by the situation of the Tamil men and women caught in the throes of war in Sri Lanka.

How to create something in real time about this tragedy whilst being caught in the midst of so many emotions? How to distinguish the feeling of injustice from that of hatred? How to justify the death of the innocent and the inevitable aftermaths of battles between good and evil?

Thanks to the great Tamil poet Poundidavadi the theatre troupe was able to find words to weave the show together and present a ritual letting us hear the voice of the dead, of all the dead: the killers, the accomplices, the brave, the cowards, the heroes, and above all the resistance fighters…

Karuppu is the spirit of the vigilant man…

Karuppu is the goddess Kali, the ultimate form of energy

This union between energy and consciousness, the dynamics of a whole universe is as fragile as the relationship between man and woman…

Karuppu is a theatre show danced to a music by Jean-Jacques Lemêtre, composer and musician of the Théâtre du Soleil.

Many of you know my passion for theatre, my journey and this incredible adventure, the Indianostrum theatre, a troupe initially born in Luminy in 1997 then resurrected in 2007 in the south of India.

This year we are welcomed at the Théâtre du Soleil from 4 April to 4 June to perform three of our shows: Kunti-Karna, Terre de cendres (land of ash) and Karuppu.

For this purpose we have launched two fundraising campaigns:

One via an Indian fundraising site: Cycle de vie

The other via a French non-profit organisation: paysages humains

First of all, I would like to thank those of you who have already contributed.

This year we will celebrate the tenth anniversary of our troupe in India, ten years of work, sacrifices, real passion and countless support and encounters that have led us to a residence at the Théâtre du Soleil, a place that has inspired us so much…

Our one and only concern has always been funding, nothing else! Because we have a magnificent place in Pondicherry, dedicated comrades and we are driven by an inexhaustible desire for theatre… as well as a certainty that increasingly guides us: theatre is going to be one of the last refuges in our society to reflect upon our troubles and to dream of a more beautiful world.

Throughout the world there are institutions, foundations, countries, cities and regions that finance theatre. This residence in Paris will allow us to connect with them, the only ones capable of giving us the means to carry on with dignity what we do:

Telling stories, talking about dreams, healing our sorrows, welcoming the public, sharing our passion with children, addressing the senses and seeking poetry or inner music of each of us… Inviting the other to vibrate, yes!

Your contribution is therefore vital and here is my pledge:

Vital because it gives us all the means to carry out this fight to practice our art with dignity.

We hope for a victory, which of course implies more fights to come …

In case of defeat, this will be the last one because I cannot imagine saying to those who have followed me on this road and who have sacrificed so much to believe in this shared dream that it cannot go on…

Every day, I witness our social, material and human situation. Every day, I feel powerless about improving our condition, about giving hope to these young people who give their heart and soul to theatre, my words are no longer enough when faced with extinguished fires in the kitchen, a broken limb that can not be properly treated, the officer who comes and cuts off the electricity, our landlord who demands a rent at the current market’s value, our donors who are exhausted; Dreams are made of the breath of the words while the reality chokes us a little more every day…

This is not some kind of blackmail but the only way to preserve the inner fire that drives me, the greatest danger would be for dreams to sound like lies in our ears …

I thank your from the bottom of my heart for believing in us and to supporting our adventures again and again. Be sure of our victory because we have a secret which is also a formidable weapon: Theatre.

Whatever your contribution (even simply sharing this message), I will always feel supported by friendship.

sown on your path are beginning to sprout…

As far as we’re concerned, at last things are looking brighter.

Our tour in France as part of the residence at the Théâtre du Soleil was confirmed and as a result we have been invited to Denmark by Eugeno Barba, a major director, to perform in his theatre

I shared this good news with everyone in the troop and we are all really happy about it.

I have attached to this email the scanned receipt of your donation for which I would like to thank you on behalf of the whole team. Could you please give me your postal address so that I send it to you by mail?

Here are two reviews of the show.

Throughout this month, we are going to film our play to offer it to festivals.

From May 1st and for two months, part of the team is going to train with a renowned master in a sort of popular theatre in a village.

Then we are planning to present a small project we have been working on, about Ophelia, as part of the “Hamara Shakespeare” festival at the end of June in Chennai.

We will then perform this play throughout July in our own theater.

From September a girl who used to run an acting school in Mumbai will join us as the administrative manager of the company. I think this we should primarily focus on developing this aspect. It would mean that, at last, we have someone with the skills to run our company, my administrative alter ego so to speak.

So these are the latest news… Once again full of dreams, with a highly motivated team, a great tour ahead of us and we are now working…

The Indianostrum theatre company was created 7 years ago by the French-Indian director Koumarane Valavane.

After facing the difficulties involved in setting up a small theatre company, in Pondicherry, Indianostrum has been running a small theatre space since 2012, in what used to be a French film theatre called “Salle Jeanne d’Arc”, which previously ran for 80 years. Its full name will therefore be: Indianostrum “Pathe, Cine Familial”.

Indianostrum aims to promote modern theatre as part of the country’s cultural life, developing new texts that highlight the specificities of modern Indian drama and exploring the connections between all traditional forms, transcending political, historical and social divisions.

From Dec 14 to 30, 2015, Indianostrum is welcoming Ariane Mnouchkine and 12 members of her Théatre du Soleil company for a series of workshops in its Nomadic School.

Unfortunately, in 2013, the theatre was seriously damaged through a fire.
Today the roof still needs repairing, the electric system being entirely renewed and the building rebuilt…

Thanks to Valérie Joly (music composer and performer) we learned about the hard work of this brave company.

We will meet them on January 24 and 25, 2016 to estimate and define together our commitment towards them.

“We all need to have a creative outlet – a window, a space – so we don’t lose track of ourselves.” Norman Fisher

Our visit to Indianostrum, Pondicherry, in Tamil Nadu, one of the largest states of South India, on 24 and 25 January 2016.

Here we were with Koumarane Valavane and his small team, sitting down, drinking tea in a beautifully painted theatre.

A small and courageous team, full of energy, laboring to welcome Ariane Mnouchkine’s group (Le Théâtre du Soleil and La Cartoucherie, Paris) who had just started the first rehearsals of her new play right here. Indeed, since December 2015, about 15 actors and musicians successfully carried out workshops attracting more than 80 “trainees” from all over India.
Rows of costumes in the entrance hall… The stage stripped of its decors left a bare space for inspiration and research work.

We thoroughly enjoyed the creative vivacity!

However, that Sunday in Pondicherry, everyone was out and about, which meant we were able to quietly listen to Koumarane telling us about his aims, past difficulties (including the fire that destroyed more than 60% of the equipment in 2013), and his new adventure.

A new and long-term initiative, which will enable these artists to tour and promote modern forms of drama whilst maintaining the tradition of folk theatre: the creation of a travelling theatre, just like Moliere’s, on the roads of Tamil Nadu, will enable them to explore, practice and eventually transcend traditional forms of drama.
Indeed, every year folk shows spread across villages though numerous festivals. According to the tradition, they must last all night long.
Thus, from April to September 2016, Indianostrum’s project will entail finding its path through these country areas and improving its practice whilst performing traditional forms of folk theatre.
For the rest of the year, back in Pondicherry, the Indianostrum company will be back on its own stage, performing or presenting other shows.

Extremely busy with sustaining this permanent theatre group (about 10 employees and 10 interns), Koumarane is still struggling to “make ends meet”…

Public subsidies and institutional support are scarce in India and 45% of his budget is covered by donations (with an annual budget of €30 000).

We therefore started (what we hope to be) a mid- or long-term partnership with this theatre.

To this day, we have supported their efforts through the donation of €2000 and we shall give them an extra €700 in a few weeks time. This total of €2700 represents one month of the company’s total wages.

“Dreaming shortens life. It was about time to start.”