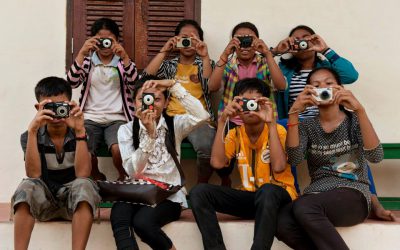 ‌ACCOUNT OF OUR MEETING WITH THE HUSK CAMBODIA NGO

‌We shall name this “The Husk model”

This was set up by Fiona and Anthony Jaensh, an Australian couple who fell in love with Cambodia ten years ago.

‌Having decided to depart from the overwhelming tourist centres of Angkor, the mythical city of the Khmer empire, they built both a boutique hotel and a project a few kilometers away to support village communities in the surrounding area, including the village of Komphein, known as the “Ladybird”.

‌A model more than a project …

It perfectly identifies the essential problems of Cambodia:

A mix of issues around water, health, education and the environment

Peasants drink water that they pump only two meters below. Unhealthy and polluted, it is a serious cause of illness.

‌In order to address to this major challenge, Husk found American suppliers who provide a technique using a water pump easy to use and maintain at a reasonable cost.

‌Each pump consists of a filter made of three layers of natural materials: sand, gravel and coal, which combined together serve as a filter.

‌Set up in gardens (see photos) they are convenient and space-saving.

‌As an alternative to the unsanitary conditions of the dwellings, Husk has woven a network of support with pupils from schools from international schools in countries like Singapore and Hong Kong … to help them rebuild houses of wood and woven palm leaves.

‌On the environmental side, the second problem of this poor country, which was decimated by the successive wars of the Khmer Rouge and the Vietnamese, is the lack of waste collection policies in cities as in villages.

‌Therefore, the second, practical and useful bright idea implemented by Husk is the collection and use of empty plastic bottles to build the walls of their school.

‌By setting up a barter in the village, trading plastic bottles for rice or school supplies, they not only solve a lack of facilities, but also help to empower families and children in a country where “charity business” has replaced self-development.

‌Indeed, today Cambodia only survives thanks to tourism and foreign subsidies, primarily from the European Union.

‌The walls are therefore made of bottles: filled with non biodegradable rubbish, the bottles are stacked and packed between two layers of cement.

‌Finally, the second environmental problem of the country is the deforestation planned as systematic cuts by some members of the government, massively benefiting a handful of people and foreign companies.

‌Just like every visitor, we planted a tree, two even: two mango trees which we hope will bear some fruit within 4 years.

‌Continuing on our path under an excruciatingly torrid sun, we followed the three actions that complement this clever range of alternative resources to alleviate poverty and illiteracy.

We enjoyed these delights with Fiona and Anthony whilst asserting our keen interest for their approach, our support in the choices they made and our desire to take part in a small way to their effort.

Husk’s resources: Husk collects $5 of profits from sojourn. $ 5 for every guest on the Walk and Talk tour fund projects. The Day in a life tour funds $5 per person, as well as purchasing of trees, eggs and rice from the village payments to the host family, local ox cart drivers, purchase of trees and the family who cooks lunch (so delicious I must say!)

‌The visitors (tourists for the most part) pay a package for the day, 50% of which is given to the organisation. With the addition of donations from individuals or foundations such as Paysages Humains.

HUSK has been working with the communities in the Treak and Kompheim villages located in the Siem Reap province in Cambodia.

Their goals are simple: to provide access to running water, health, education, environment preservation, like many countries in this part of South-East Asia.
And most of all to enable the families to stay together in their local communities.

HUSK was set up and has been supported by the owners of the Sojourn Boutique Hotel and Beyond Unique Escapes located in Siem Reap, Angkor. All the participants are volunteers except for the local Khmer team paid by HUSK. Their commercial tourist activities enable them to directly support the organisation through donations and a percentage of their profits.

Here are some of their projects:

But also the original project « Bottle Buildings or “Eco Block”:
Indeed, collecting waste outside of tourist areas is a serious problem in Cambodia. Consequently, harmful effects on hygiene and the environment keep increasing.
The concept initiated by Pura Vida is based on collecting empty plastic bottles in order to make “bricks” then used to build walls.
For instance, a school was built thanks to the community school groups and outside volunteers who collected15 000 bottles.

We will be spending time with them to discover all the aspects of their actions, visit these villages and meet their inhabitants on March 17, 2016.