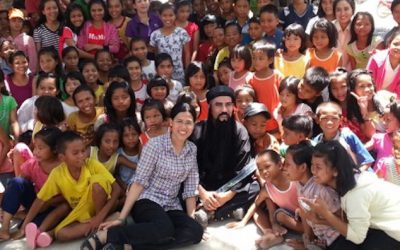 Hung and HONG AN

Collaborating with Hung and friends in order to build a bridge linking villages along the Mekong, thus allowing children to access their school

Hung and HONG AN

In the last 20 years, Vu Dinh Hung has been involved in numerous charitable actions, often out of personal initiatives.
First he took part in several projects with a group of colleagues from Vietnam Airlines, where he used to work.

Then, within his social circle, he managed to gather small groups of volunteers to carry out specific actions in the provinces (on average two days in a row), aimed at providing medical and dental care and medicines to children from underprivileged backgrounds, affected by HIV, from ethnic minorities as well as elderly people.
He usually works hand in hand with local charities (Catholics and Buddhists) religious organisations that act as a local relay.

Other activities include tours and entertainment for children – with clowns, jugglers, small theaters and even hairdressers – on the occasion of local festivities during which the volunteers hand out sweets, school supplies, milk, mooncakes…
At these events, dressed up as a General, Hung performs Kung Fu.
Another kind of ritual: the pleasure of interrupting New Year’s Eve festivities with friends and family, to offer gifts and friendly activities to elderly, lonely and homeless, people as they encounter them in the streets.

Current and upcoming activities now grant more importance to the construction of frameworks such as schools and bridges in underprivileged areas.
Thanks to improved living standards, longer term projects regarding the distribution of food and basic commodities are less necessary.

These new projects are being run in collaboration with the HONG AN organisation.
The one that caught our attention is the plan to build a bridge (perhaps two) in the Mekong Delta.
These bridges will allow students to reach their school more directly, without crossing the numerous waterways by swimming and, sadly, often drowning.

Indeed, because of their greater scale, these frameworks require more funding.

Hung told us in february that they achieved a first bridge and they will begin a second one.