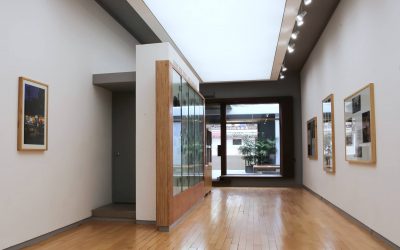 The “Livinwondr Project” we decided to sustain at the time we were in Ho Chi Minh City with Galery Quynh is ready to take off! Quynh organize an exhibition of the work of Hung Viet Tran on the 6 of may to reveal it and to collect more funds to continue the sculptural structure by creating new stainless-steel tubes.

That day we were meeting with Hung Viet Tran and looking forward to it. We had already talked extensively with Quynh, our friend and director of the first and most innovative art gallery of this great city in southern Vietnam.

It was 3:00 pm and the heat was overwhelming but as soon as we entered this artist’s studio, we were taken aback by the freshness and vision of the sculpture.

Its designer, the artist Hung, Viet Tran welcomed us with his foot in a plaster cast, dark circles under his eyes for having set up all night, but he was smiling.

Indeed, he rarely gets the opportunity to welcome curious foreign donors in his small studio.

He was right in the middle of moving to a bigger and quieter studio (see https://www.facebook.com/thepublik/)

Hung lives between Saigon and Los Angeles; he is a recognized and talented artist, serious and stubborn; He spent the last three years developing this project and seeking technically simple, invisible and efficient solutions for assembling his sculpture.

And we can testify he has successful managed to do so.

Livinwondr is a stunning sculpture or rather a concept of openness to talents (artists, designers, architects, tattoo artists, drawers…), a gateway to the public (in, out, large or small), a subtle and sophisticated engineering – editable and scalable these shapes seem endless.

But what is it and how is it made?

These stainless steel bars, capable of withstanding external exposure and wheatear conditions, are engraved in a factory according to a very particular and meticulous (negative) process.

Each bar represents the engraved project of one artist or another participant.

That day, it consisted of 25 bars.

You can see each of her designs online at: www.livinwondr.com

Livinwondr will be presented at the Quynh Gallery from 6 to 14 May: an exhibition which also aims to raise money to engrave new bars and develop the overall sculpture.

Hung has already collected 25 drawings waiting to be used.

We have just received these drawings and are happy to pick one that will be engraved on this occasion and mark our support to this unique and long lasting project.

Each bar costs $ 800. They are created in 5 copies of which one is included in the sculpture and another is given to us.

The next, ambitious, step will be to exhibit a sculpture made of a hundred engraved and assembled bars in front of the Vietnam History Museum in Ho Chi Minh City.

stablished in 2003 by Quynh Pham, the Quynh Gallery has been promoting contemporary art practice in Vietnam for over a decade.

Dedicated to various forms of artistic expression –drawing, painting, video, installation– the Quynh Gallery is working with newcomers as much as established Vietnamese artists.
Its purpose is to promote education as well as frameworks supporting art in Vietnam. It is working with Vietnamese and international artists, curators, museums and art spaces.
For instance, it took part in Art Basel Hong-Kong in 2016.

In 2014, Quynh launched a (non-profit) initiative named Sao La with the twofold mission to make contemporary art accessible to the general Vietnamese public through didactic programs and to nurture Vietman’s growing art community.
Sao La not only serves as a platform for exhibitions, film/video screenings, workshops and lectures but also as an informal space for young Vietnamese artists to experiment, challenge and develop their creative practices.
We met Quynh in Ho Chi Minh Ville two years ago and were interested and enthusiastic about her commitment, her knowledge in contemporary arts and her desire to share these with the largest number of people.
Today, we share the will to promote contemporary arts through sustainable projects with a yearly grant to help creation, a special prize granted to a work of art and new kinds of workshops…

And to support the original project “Live in wonder” or “LIVINWONDR“.

This is a collegial project, an “organic” artwork that will bring together some thirty artists at the time of its opening at the gallery (late February/early March 2016).

This modular and evolving sculpture will then be ready for touring and be exhibited in emblematic locations in Saigon and Hanoi.
We will be together in Ho Chi Minh City from March 28th to April 1st 2016.