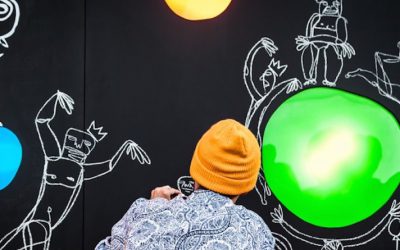 A rendez-vous of “without borders artists” and installation of the “Fresque des Fantaisies”, an arts work presenting visual art on their wall forms.

Co-founded by Sylvie Teste, the Escales Improbables have been based in the city of Montreal since 2004.

In 2014, Paysages Humains supported one of its amazing projects combining culture, urban landscapes and social interactions: the project of a “Ministry of Human, Plant and Elemental Affairs and Patents.”
The Ministry presented its first study which collected impressions from 9 residents and regulars of the Quartier des spectacles in Montreal about their environment and how they would like to see it change.
Their accounts gave rise to 9 projects, 9 alternative realities.
After downloading a software created for the occasion, the spectators-surveyors were able to watch on their phones these virtual sequences synchronised along a marked trail.

In the 2015 festival we took part in a small collective event: La Fresque des Fantaisies (fantasies fresco) by Etienne Doucet, in an emblematic location of the city, the Bain Mathieu.
A young artist influenced by street art, Etienne Doucet presented a visual creation where the boundaries between figurative and abstract arts are slim, exploiting the visual art form of murals whilst seeking to abolish street art stereotypes and to lessen the huge gap that separates it from contemporary art.