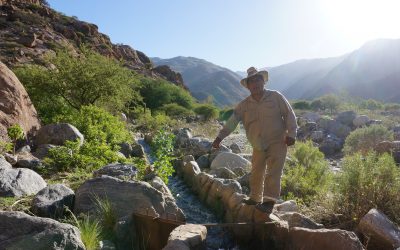 Thanks to the involvement in rural tourism of the Origins travel agency, run by Chantal Bourdais and located in Salta, we met Enrique and Carmen, two farmers from a local Indian community.
Keen to add rural tourism to their activities, they built a tiny house on a peak above their farm to welcome travelers

Overlooking the Cafayate Valley and its vast vineyards, this was the ideal spot to observe both the region’s beauty and problems.

On location we noticed that the official water supply system built by the local authority only provided water to the Indian farmers for one out of every 24 days. The rest of the month the water was only supplied to the valley’s wealthy wine makers.

This was absolutely insufficient to irrigate their lands.

Through persistent demands and claims they obtained the authorization to dig their own extra parallel canal, with D.I.Y. means, to collect the leaking water from the river…

But even then it was still not enough to provide water to the few farms in the small valley.

On our first day there, together with Enrique, Chantal and other farmers from their community we went to evaluate the current state of the lost water collecting system along the river.
We immediately noticed that the water collection devices were rudimentary and weak, that their open air transport meant a great amount of water evaporated along the way, thus causing a significant loss of the salvaged water.
We also realised that collecting water nearer the source of the river would increase the water-flow and its regularity.

Paysages Humains therefore committed to contribute to the cost of the new pipes needed for:

The following day, the community gathered into a general assembly to discuss their needs and the allocation of the initial € 600 we had given them. Various other attributions were considered but the final vote gave priority to the transport of water, the most vital and expensive aspect of their small budget.

We noted that if pipes running from the source were needed this sum would only partially cover the cost of the project.

We therefore asked them to estimate the additional cost for works to be implemented in order to get the best result for collecting and transporting the water lost by the river.

In January 2015, they sent us a first estimate of €1250 which they thought would cover the implementation of half of the project, comprising 350m of pipes to collect water from the source of the river and bring it to the community canal thus getting all the water meant for irrigation.

We decided to cover this cost by sending them an extra €650 thus enabling them (to) start as soon as possible and complete the connections before the start of a new rainy season.

A second estimate of € 3500 was then made, meant for a second stage comprising the following works:
Buying another 800m of pipes, i.e. 134 tubes. These 800m will be used to avoid losing water along the trajectory.

Our means are still too modest and do not yet enable us to cover this stage of the works but we are keeping in touch with them.
This project is meant to be completed and operational in 2017.
We will therefore return there at the end of 2016 to take part in its final stage.